THE DELHI WAY: A WARM WELCOME TO INDIA 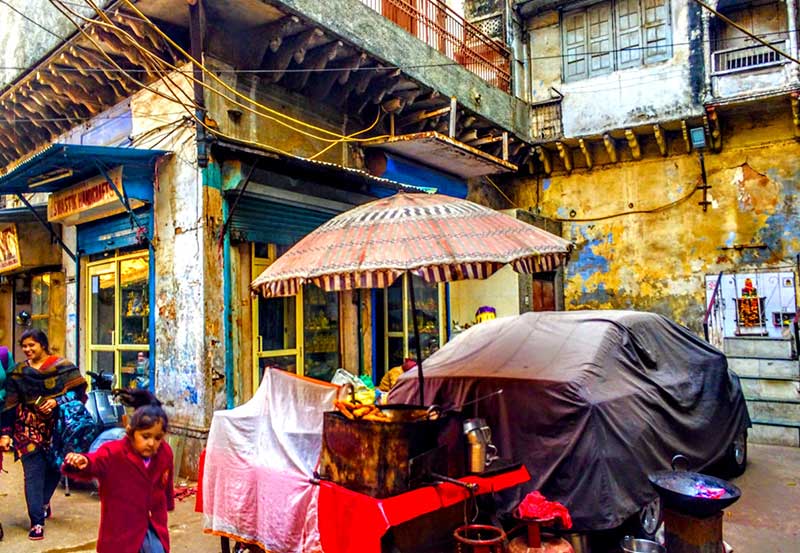 Slightly over a month ago, I embarked on a ten-day journey to India during my winter holiday break. While I was excited about this trip, I will admit I was also a little nervous. I don’t usually get nervous about my travels these days, but this time it was a little different. I had changed tours since the time I had purchased my plane tickets, and as a result, this also changed my travel itinerary. Instead of traveling with a group for all ten days, I now had two and a half days on my own before the tour was scheduled to begin. Usually a couple of days (or more) on my own in a foreign country doesn’t bother me, but I had heard stories about India. I had heard wonderful things–people who told me it was their favorite country they had visited–and I had also heard awful things–news reports about women being targeted, lists ranking India as the #1 most dangerous country for female travelers, stories about extreme culture shock in India. To put myself more at ease, I looked for day tours I could take to help me become acquainted with Delhi. That’s when I found The Delhi Way.

I could not have been more pleased with this company! They offer a wide variety of tour options which they can customize to your preferences. I opted for “Delhi in a Day,” a 6-hour tour around Old and New Delhi. The company consists of Divya and Prianka, two women who formerly worked in advertising but left the field to follow their dreams of working in tourism. I was pleased to learn that unlike many other companies, they did not require a two-person minimum to run a tour. This meant that even if no one else was interested in the same tour on the same day as me, they could still run the tour as long as one of them was available.

And that’s just what happened! I ended up on a private tour with Divya as my guide. She picked me up promptly from my hotel at 10 a.m., greeting me as if we were old friends. I felt at ease immediately.  As this would be my first full day in India, I was excited about receiving hotel pick-up service as opposed to being given a meet-up place because it meant I didn’t need to try to figure out how to get around before my tour began. We would be escorted in a private vehicle by a driver around the city, with the exception of some walking and auto rickshaw rides within Old Delhi.

The tour itself was better than I could have even imagined. Divya provided a relaxed and casual atmosphere. She provided a historical context for the sights I saw, but not in a lecture style. Our first stop was Agrasen ki Baoli, an ancient step well in New Delhi. The purpose of a step well was to provide a water source in an area where water availability tends to fluctuate greatly depending on the season. 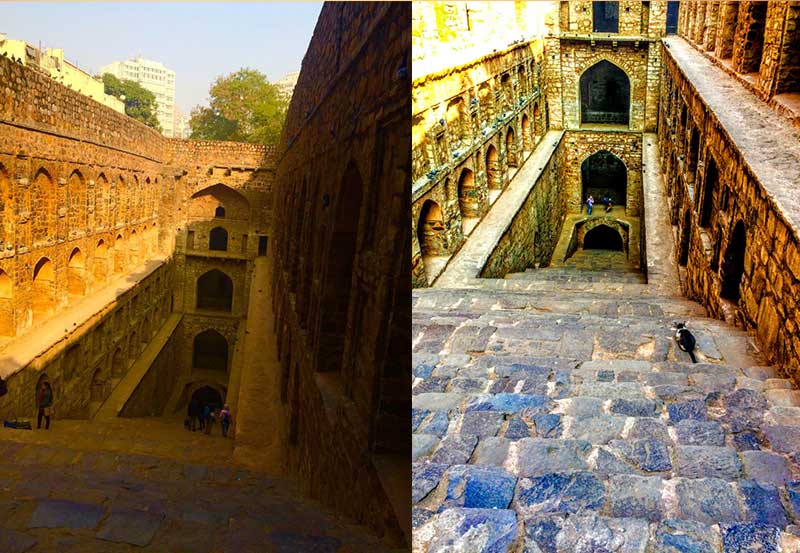 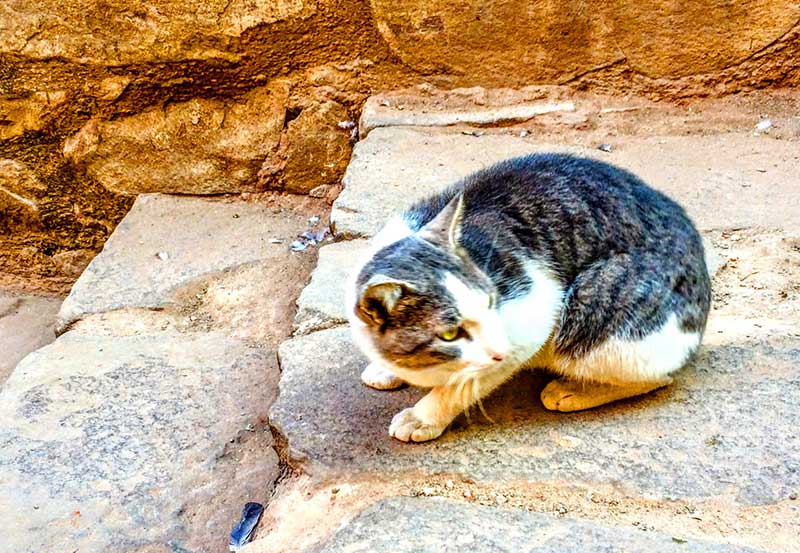 Next we visited a laundry facility to see the traditional methods for washing laundry. Divya said this facility is mostly used for large establishments such as hotels, while private citizens typically wash their own laundry at home. It sure looked like a lot of work! 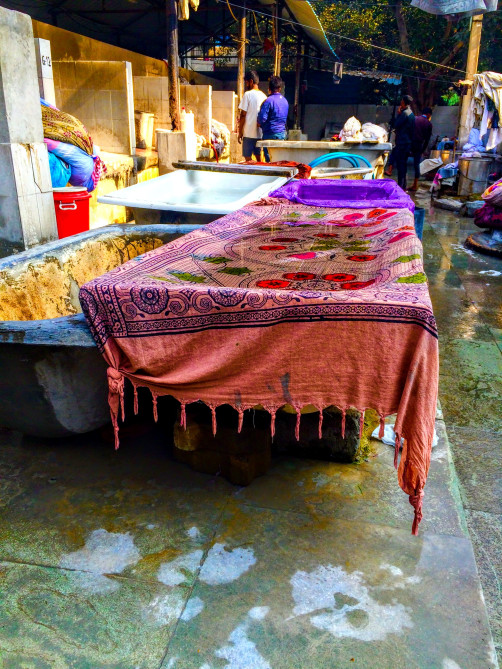 We headed into Chandi Chowk–old Delhi–and parted ways with our driver for a while. Instead we would explore the crowded streets and allies by foot and auto rickshaw. This is a place that truly captivates the senses with all the sights, sounds, and smells. We visited several shops, including A. Kumar’s spice and tea shop where the shopkeeper packages all his spices in such a way that it is safe travel with them. So I purchased several teas and spice blends for myself and as gifts. We saw the wedding shops, selling all the jewelry and other accessories used in weddings. We wandered through ancient allies and courtyards, contemplating what they must of looked like long ago. 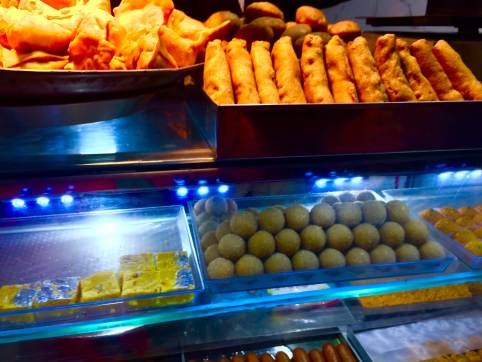 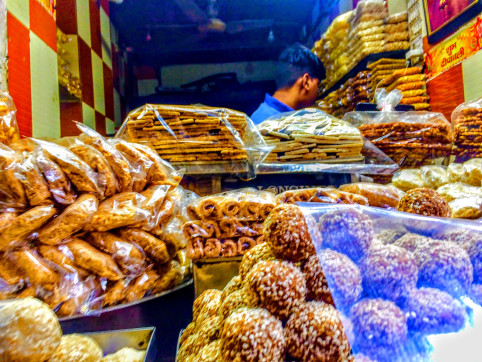 There were snacks! Divya said while she cannot vouch for most of the street food and its cleanliness, she did have a tea vendor that she trusted. His stall is hidden away in a little ally, but his tea was the best cup of chai I would have the entire trip! Something about drinking a cup of tea right off the street while sitting on a dusty step and watching the chai seller making more tea just makes it that much better. This tea experience joins the ranks of my top international tea experiences! We also stopped at a shop for samosas and another shop for a bag of local snacks. 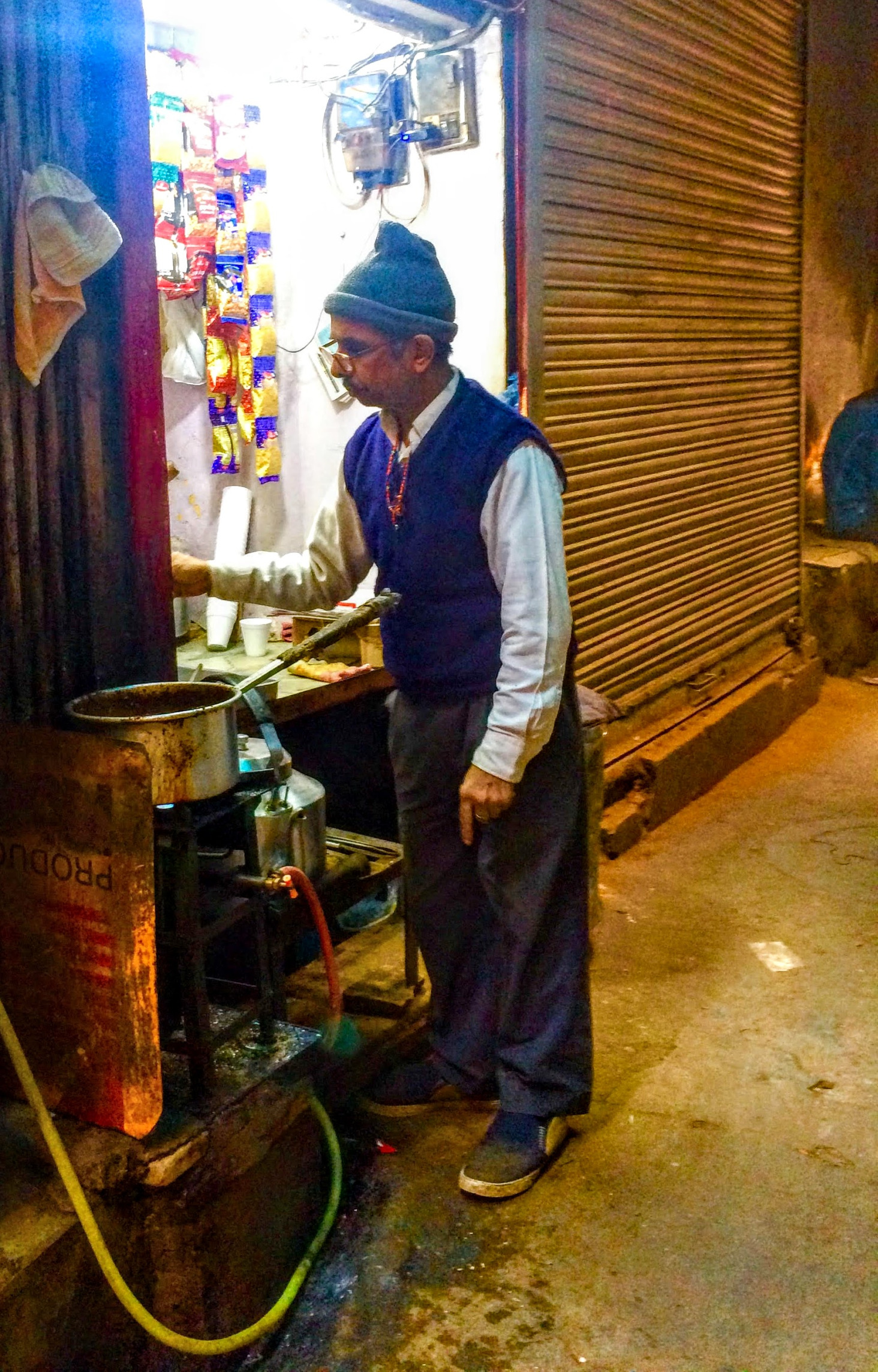 We visited three religious sights, First we visited a Jain temple. No photos are allowed inside, but it was beautifully and intricately decorated. People who follow Jainism believe in non-violence to the point that they literally wouldn’t even harm a fly. They might carry a broom to sweep the floor before each step they take to ensure they do not step on any insects and they wear masks over their mouth to protect from inhaling any insects. Inside the temple, there were fan and light covers to protect any insects or birds who may fly into the building from any harm. I had never known very much about Jainism, so this was an interesting visit for me. We also visited Jama Masjid, one of the largest mosques in India. It was built between 1644 and 1656 by the Mughal emperor Shah Jahan, the same emperor who built the Taj Mahal. We arrived shortly after a prayer time had ended, so I saw people rolling up all the prayer mats. 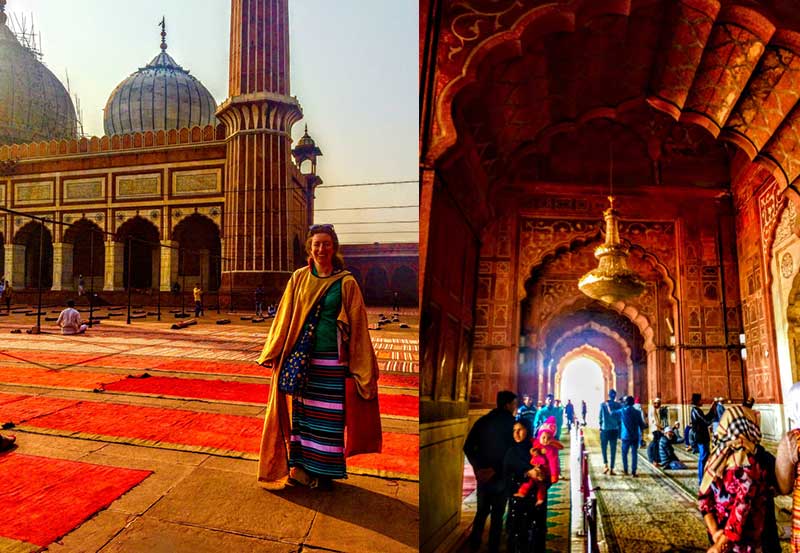 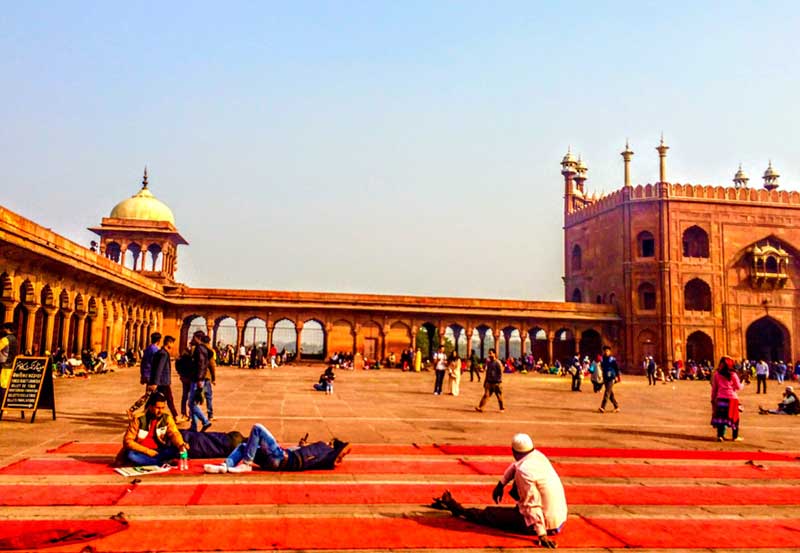 Finally, we stopped by a Sikh Gurudwara (or temple) in New Delhi. The most interesting part of this visit was not the temple itself, but the community kitchen. I learned that all Sikh Gurudwaras have their own kitchen where volunteers can come prepare food. Meanwhile, anyone can come and eat a free vegetarian meal from the kitchen, no matter their  religion, caste, gender, economic status or ethnicity. Everyone sits together side-by-side on the floor. Divya took me to the kitchen and gave me the opportunity to try making the chapatis to serve with the meal. I also got to try stirring the giant pot of potatoes! I was impressed by this feature of the Sikh religion. 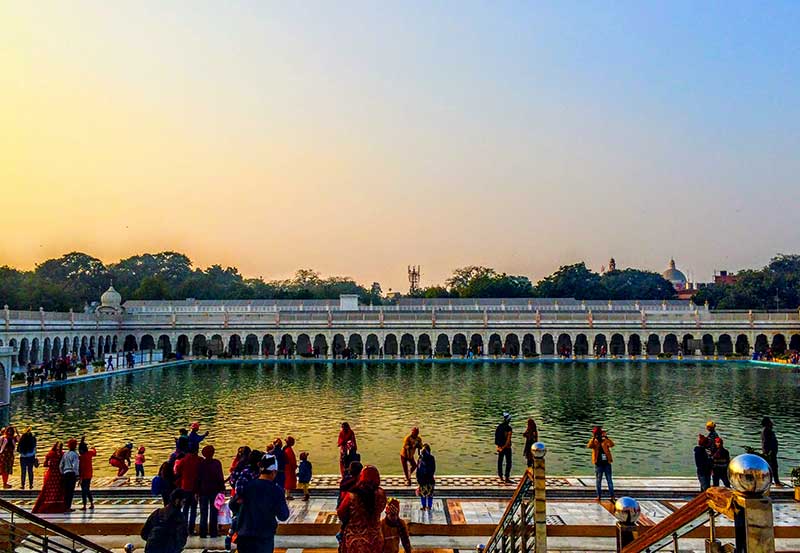 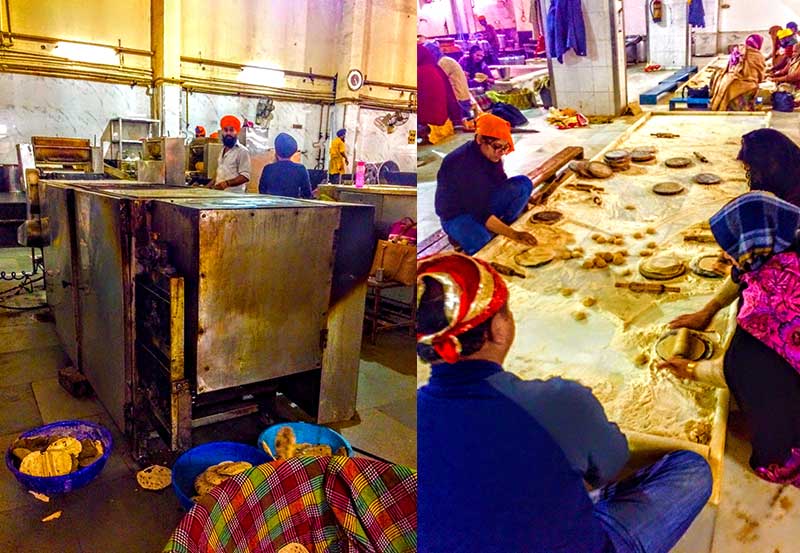 We had a late lunch at Hotel Saravana Bhavan in Connaught Place. It was a long wait, but definitely worth it! Divya wanted to take me here so that I could get a taste of South Indian food, which she said is very different than most of the food I would encounter on my trip (since I would be staying in North India). The food was delicious! 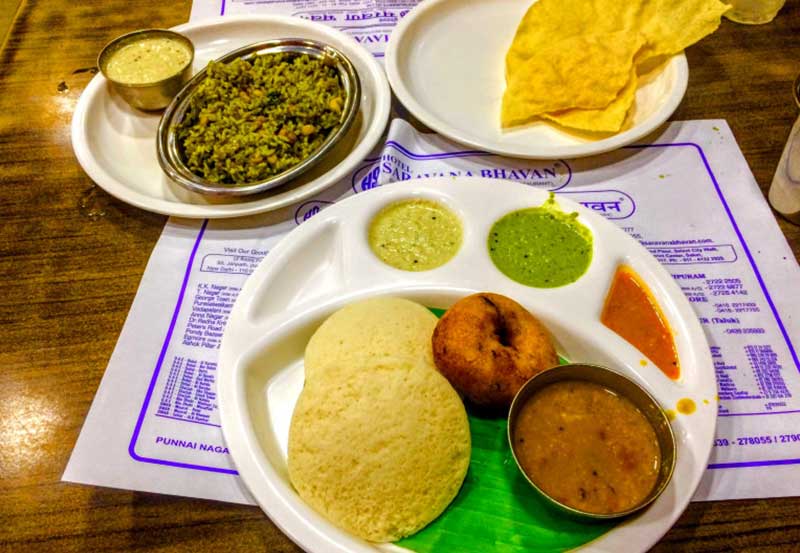 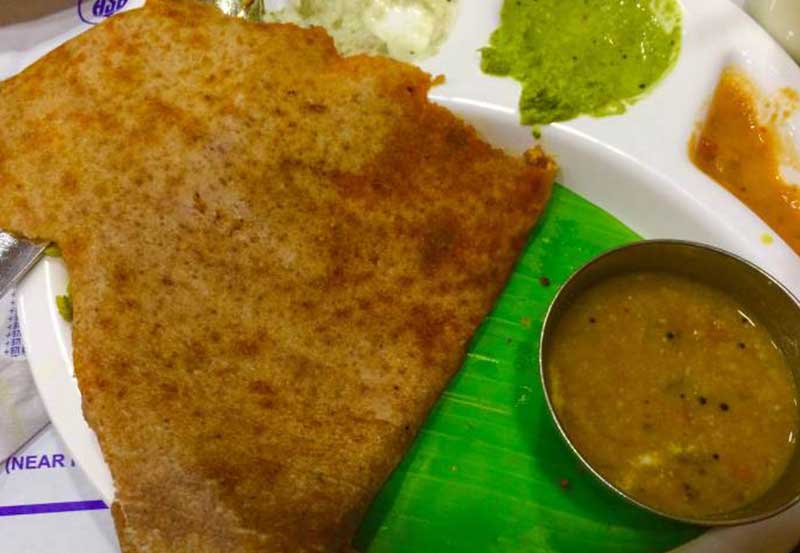 In addition to the sights, Divya took me to some shops in both Old and New Delhi. Besides the spice and tea shop we also visited a jewelry shop and a textile shop for pashminas. As with everything on this tour, the shops we visited were based on my interests. I was very pleased with my purchases and happy to have Divya’s help in taking me to shops that she knew were trustworthy and fair.

The tour ended and the driver dropped me back at my hotel, where Divya presented me with a handy pocket guide of Hindi words and phrases, as well as a neat bag for holding my shoes during temple visits. It was a very busy day for my first day in India, but I couldn’t have been happier! I felt relaxed and invigorated after this wonderful introduction to the country and was looking forward to more adventures!